Purchase at TheGameCrafter
2-6 players
Ages 12 and up
Playing Time: 60 minutes+ 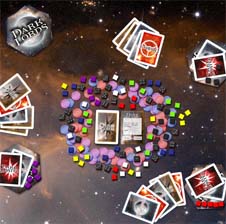 (Click to Enlarge)
The game of Villainous Secrets & Interstellar Conquest.

The last two Dark Lords were the greatest evil the Galaxy had ever known. They're dead now and every other villain in the Galaxy wants to take their place.

Unfortunately, the last two took the secrets of Dark Lordship with them. As far as anyone can figure, there are three hard and fast rules:

1. You must wear lots of black

2. Your name must be Dark something-or-other

3. There can be only one Dark Master

In Dark Lords, you gather resources in secret, building up your influence to control the galaxy. Each player attempts to guide their Dark Master and Dark Lords to victory by building, negotiating, and conquering. Make your nefarious plans, build out your defenses, but destroy your foes before they overtake you.

Find answers to questions, new ways to play, and free expansions on the Forums.