Purchase at TheGameCrafter
2+ players
Ages 12 and up
Playing Time: 30 minutes 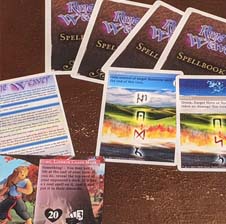 Rival mages, so brilliant they can tell what spell their foe is casting before it completes, so powerful they can even cast five spells at once. Which spells will resolve and which are bluffs? Perhaps your opponent is keeping their options open until the last moment. Your last moment.

Runeweaver is a card game often seen played in taverns of Siathu, Vortex, and Telvad on the Falls. The Cephaloid brought it with them when they came from the Realms of Kel-Sir and it has since exploded in popularity.

Each player needs a deck of 16 spell cards and 1 hero card. Decks can be customized, but can only contain a maximum of one of each card. Spell cards have five rows representing: Water, Air, Earth, Fire, and Death. Some rows start spells, others contain runes to finish casting the spell in that row. Each spell requires 0 to 4 runes on the same row played after it to cast.

On your turn, each player places a spell card facedown into their Weave. All spell cards are revealed then simultaneously and then spells resolving this turn resolve in a predetermined order. Some spells will be Summons or Enchantments that are placed in your Field, some are one shot spells. Then cards in the Field activate and Summons attack. The last Hero standing is the winner.